The Ineffable Con is an unofficial convention run by and for Good Omens fans. We don’t make any money from running our events; any surplus left over after covering our running costs is donated to charity.

We were founded in June 2019 by Rachael and Tracionn, who together ran the first Ineffable Con in Buckinghamshire, England, in October 2019. The convention sold out months in advance and raised £1,258.93 for Alzheimer’s Research UK in memory of Sir Terry Pratchett.

Following the convention, and after the pandemic hit, Rachael and Bethany ran a series of online events, starting with the Good Omens 30th Birthday Party and including The Ineffable Con 2, all raising money for Alzheimer’s Research UK.

Rachael was given her first Terry Pratchett books (Guards! Guards! and Reaper Man) for her eighth birthday, and has been a fan ever since. Good Omens introduced her to Neil Gaiman a few years later, and a whole new trove of fantasy worlds.

She got her start in fannish organising around 15 years ago as Treasurer of the Tolkien Society. Since then, she’s chaired four conventions in Harry Potter and Star Trek fandoms, as well as every Ineffable Con, and held staff and committee positions in countless others relating to Tolkien, Star Trek and general science fiction.

In 2019 she moved back to the UK after several years overseas and was itching to set up a new convention just as Good Omens fandom exploded. She co-founded The Ineffable Con with Tracionn, and had an amazing time.

In real life she’s an astrophysicist and science communicator, and would very much like to run away to Alpha Centauri. 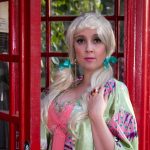 Good Omens is Bethany’s first fandom, and she dived in headfirst, writing her first fanfiction, attending her first convention (The Ineffable Con in 2019), and doing her first cosplay! Good Omens was her first introduction to Terry Pratchett and Neil Gaiman, and, as a Gabriel fan, she’s especially enamoured of the TV show.

A self-described heathen, she enjoyed co-hosting the Good Omens 30th Birthday Party and rewatch after-parties with Rachael and has co-chaired The Ineffable Con with Rachael since the second iteration. Her day job also requires her to organise large meetings often, though none so fun as this one. She is very excited to be part of The Ineffable Con team!

Tracionn is a co-founder of The Ineffable Con with Rachael, and co-chaired the first convention in 2019.

She’s been living a fan life for as long as she can remember and doesn’t think she could ever stop. It all started with Star Trek (Kirk/Spock yes please) back in the 80ies when she was about 10 years old and she’s accumulated a couple of fandoms and OTPs since then.

She especially enjoys OTP conventions, many of which were run by Rachael, and had so much fun that she ended up running one herself: Coinelot in 2016, a Merlin/Arthur convention. It was a lot of work and stress but all worth it the moment people arrived.

And then the TV adaptation of Good Omens captured her heart and she ended up co-founding The Ineffable Con and co-chairing the first event with Rachael.